Much concern has already been expressed at the excessive violence and intimidation witnessed in the recent block pramukh elections (which function as rural decentralisation institutions) of Uttar Pradesh held on July 10.

However, attention also needs to be drawn to the curious fact that even before voting took place, Bharatiya Janata Party-backed candidates had already been declared elected unopposed on 334 seats out of the total 825 block pramukh seats in the state. In other words, even before a single vote was polled on July 10, as many as 40% of the total number of seats were safely in the control of BJP supported candidates.

Why did such a large number of seats remain uncontested in a state of such high levels of  politicisation and such intense political rivalries, with many parties in the running to gain a dominant or important position in this politically most influential state of India which will also be holding crucial assembly elections early next year? And why would as many as 334 out of 349 uncontested seats  have BJP supported candidates as uncontested winners?

Here it may be pointed out that no direct voting by people takes place for block pramukhs. They are instead elected indirectly by a relatively small number of block council members who have already been elected by people.

Theoretically, of course, a possibility exists that the BJP supported candidates in all these 334 seats were such great paragons of virtue and enjoyed such great respect that no one, not even those members firmly allied to opposition parties, wanted to oppose them. But at a practical level everyone knows that this is not the reality and so we must look at other factors to explain why BJP supported candidates won 40% of seats without a contestant appearing on the scene.

Several news reports and videos have appeared describing and depicting how when filing of nominations was taking place (quite a hurried process this time) there were many cases of intimidation and harassment of potential contestants. There were cases of nomination papers being snatched or torn. There were beatings and firings. Opposition party spokespersons issues several statements criticising the violence and intimidation. 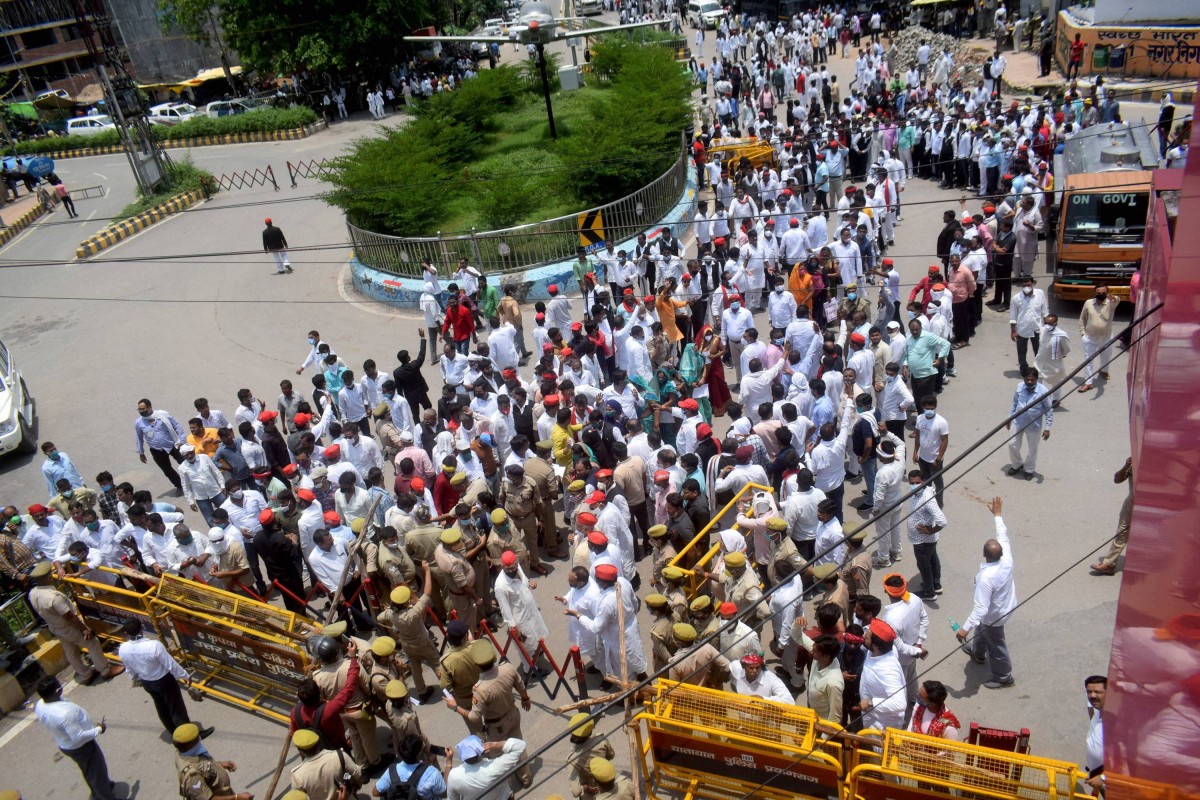 As many as 68 nominations were rejected. What is more, as many as 187 candidates took back their nominations.

In the entire hurried and tension-ridden process, if only a little while back these persons had ventured to file their nomination papers then why did they take their name back and withdraw from contest so soon? Why did they change their mind in so short a time?

Ultimately the result was that the BJP-supported candidates were declared elected unopposed from 334 seats. A total of 349 seats had uncontested results, and among these as many as 334 had BJP supported candidates as the beneficiaries of the lack of contest. We do not have the details of the remaining 15 seats – whether these involved allies or opponents of the BJP, or independents.

So the most likely explanation is that nearly 40% of the seats were won largely on the basis of creating such scary conditions that those who wanted to contest did not dare to contest, or else were offered money to withdraw from contest. In some exceptional cases there may have been some other factors responsible for the seat remaining uncontested, but such cases are likely to be only a few in number.

A few days earlier in the district panchayat president election too nearly 28% seats (21 out of 75) had been obtained uncontested by BJP supported candidates with similar factors at play. Before these elections were held the Bahujan Samaj Party had declared that it will not be contesting as unfair practices were anticipated by it.

Finally the last day of the three-month panchayati raj elections came on July 10 when voting was held for the block pramukh posts. In the middle of very shocking scenes of violence and intimidation the BJP won 301 more seats, taking its total seats to around 635. This was soon publicised as a major victory.

However, 334 out of these 635 or so seats, or about 53%, were obtained uncontested. Whether in the uncontested seats or contested seats, in several cases, violence, intimidation and unfair practices have played an important role and this should be investigated properly.

However the fact that the prime minister was quick to offer his congratulations for this supposed great victory of the BJP would indicate that no such investigation is deemed to be necessary by the government. Hence it will be proper if independent experts on rural decentralisation get together to investigate all aspects of the recent panchayati raj elections in Uttar Pradesh and prepare a comprehensive report on all aspects of these elections at the three tiers of Panchayati Raj – village, block and district – with special emphasis on block pramukh elections.

As assembly elections are due in Uttar Pradesh within a few months, the growing trend of violence and intimidation seen recently in these elections in a very important state is deeply worrying. Democracy is safe only when its protectors are alert, active and courageous.

Under Adityanath, some crimes enjoy the protection of the Uttar Pradesh...

In India, the Last Few Bastions Of The Free Press Stand...