Sanathan Sanstha, being probed for bomb blasts and assassination of three great democratic-secular intellectuals of India, Narendra Dhabolkar, Govind Pansare and MM Kalburgi, is an offshoot (or vice versa) of Hindu Janajaguriti Samiti (HJS) which has openly been demanding conversion of democratic-secular India into a Hindu rashtra and celebrating ‘vadh’ of Gandhi ji.

One shocking fact about HJS, not known is, that itorganized ‘All India Hindu Convention for Establishment of Hindu Nation’at Goa in 2013 coinciding with the BJP executive committee meeting there. This Goa conference of HJS for turning India into a Hindu rashtra was supposed to be inaugurated by Modi as CM of Gujarat but due to per-occupation with the BJP executive meeting in which he was declared as RSS/BJP PM candidate, he sent a message lauding HJS and its ‘work’. His message dated June 7, 2013 read: 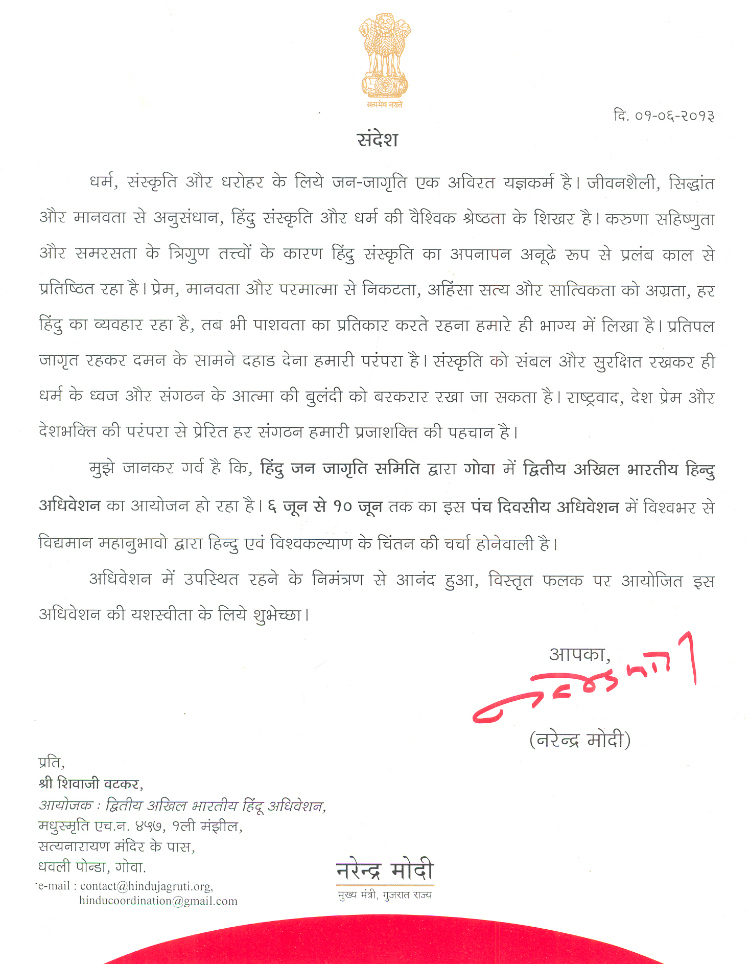 “I felt proud when I heard about the Convention from Hindu Janajaguriti Samiti. The great personalities coming from all over the world will be discussing issues related to the welfare of Hindus as also the world. I was happy to get invitation to attend such Convention. My best wishes for success of this Convention which has far-reaching effect.”

‘Hindu nationalist’[i] Modi was categorical in supporting HJS cause when he wrote: “Even though every Hindu conducts himself with love, compassion and intimacy with god, giving precedence to non-violence, truth and ‘satvikta’, repelling demoniacal tendencies is in our destiny. It is our tradition to remain alert and raise a voice against persecution…Only by protecting our culture, can the flag of ‘dharma’ and unity be kept intact. Organisations inspired by nationalism, patriotism and devotion for the Nation are true manifestations of people’s power.”

Another shocking feature of this conference was that Nathuram Godse, main killer of Gandhiji was glorified from the same stage where Modi’s congratulatory message was read.

One of the prominent speakers, K.V. Sitaramiah, a seasoned Hindutva cadre[ii], declared that Gandhi was ‘terrible, wicked and most sinful’. Rejoicing the killing of M.K. Gandhi, he went on to declare: “As Bhagwan Shri Krishna said in the Gita,Paritranaya Sadhunam Vinashaya Cha Dushkritam/ Dharamasansthapnaya Sambhavami Yuge-Yuge(For the protection of the good, for the destruction of the wicked and for the establishment of righteousness, I am born in every age) On…30th January 1948 evening, Shriram came in the form of Nathuram Godse and ended the life of Gandhi.”

This is the same K.V. Sitaramaiah who has also authored a book titled ‘Gandhi was Dharma Drohi and Desa Drohi’ (dedicated to Nathuram Vinayak Godse) in which the back-cover matter, quoting from the epic Mahabharata, demands:“Dharma Drohis must be killed…Not killing the deserved to be killed is great sin” and “where the members of Parliament seeing clearly allow to kill Dharma & truth as untruth, those members will be called dead”.[iii]

Maharashtra police which is working to unearth the conspiracy behind murder of Narendra Dhabolkar, Govind Pansare and MM Kalburgi and innumerable bomb blasts against a minority community must find way to investigate PM Modi and characters like K.V. Sitaramaiah to know the whole Hindutva terror nexus.

[i]Modi while talking to two Reuters journalists, Ross Colvin and Sruthi Gottipati, on July 12, 2013, declared himself as a ‘Hindu Nationalist’.