The NBDSA is a self-regulatory body of private TV channels, which is chaired by former Supreme Court judge A.K. Sikri. Formerly known as the News Broadcasting Standards Authority, the NBDSA was created to consider and adjudicate complaints about broadcasts and its orders apply to all channels that are members of the News Broadcasters and Digital Association (NBDA).

The media body has previously issued orders against Zee News, directing it to take down a video in which farmers who were protesting against the farm laws were called “Khalistanis”. The full list of orders issued by the NBDSA can be found here.

The first petition, filed by LGBTQ rights activist Indrajeet Ghorpade on November 30, 2020, was against certain Zee News, Zee Hindustan, India TV and Aaj Tak broadcasts on the alleged media trial against Umar Khalid in the Delhi riots’ case. The NBDSA directed the broadcasters to remove the respective shows from the website and YouTube, as well as other links, within seven days of receipt of the order.

In its June 13 decision, the NBDSA said, “The media has the freedom to report on any subject matter concerning public interest. It is a fact that riots took place in Delhi. It is also a fact that Umar Khalid was arrested by the police, and the police have filed a charge sheet alleging that Umar Khalid was the mastermind behind these riots…However, an important question that arises at this stage is whether the media has the right to treat the police report as gospel truth, and on that basis, proceed to discuss the programme as if charge of inciting violence leading to riots stands proved against Umar Khalid? Obviously, that is not permissible…”

The self-regulatory body said if the media proceeds on the basis that the investigation into the matter is sufficient to prove the charges against Khalid, “that would amount to trial by media and holding a person guilty of charges even when it is yet to be proved in a court of law”.

The panel discussions should have been confined within the realm of the police’s allegations against Khalid, which would have been permissible under the journalistic freedom guaranteed by Article 19(1)(a) of the constitution.

But because the media crossed this line, the NBDSA “took serious objections to the sensationalist taglines and tickers aired during the broadcast such as ‘Umar Khalid is the Mastermind of Delhi riots’, ‘Umar Khalid plotted the Delhi riots’, ‘He burnt Delhi, he is not a comrade, he is a rioter’, ‘Umar Khalid and Sharjeel Imam biggest masterminds’, ‘Sharjeel-Umar incited violence’…” because they gave an impression that the “accused had already been declared guilty”.

The NBDSA added that when these programmes are viewed in their entirety, “the broadcasters cannot deny the fact that these taglines create a certain perception amongst the public”. These taglines or hashtags should be used carefully, especially in controversial matters, the body said.

“In view of the above, these broadcasters/channels are advised to exercise restraint and not to broadcast such taglines and/or hashtags which project the accused in a manner as if he/she is guilty,” NBDSA said.

A debate on the Muslim population

Separately, the media body on June 13 directed Zee News to take down a show which was telecast last year by it on the issue of the Muslim population titled “Kudrat Bahaana Hai, Muslim Aabaadi Badhaana Hai?”

This petition was filed by advocate Ghorpade along with journalist and transparency advocate Saurav Das and Citizens for Justice and Peace on June 26, 2021.

According to LiveLaw, the authority noted that the headline of the programme was telecast “without any data or substantial material to support it,” and during the hearing, the channel could not justify this statement contained in the headline.

It further noted that the taglines displayed during the debate such as “Nizaam-ekudrat ya Hindustan pe aafat?“; “Kudrat bahana hain, Muslim abaadi badana hain?“; “Hum dohamare do par majhabi rukawat kyo?“; “UP me chunao, isiliye abaadi par tanao?” were used without any supporting data or facts. 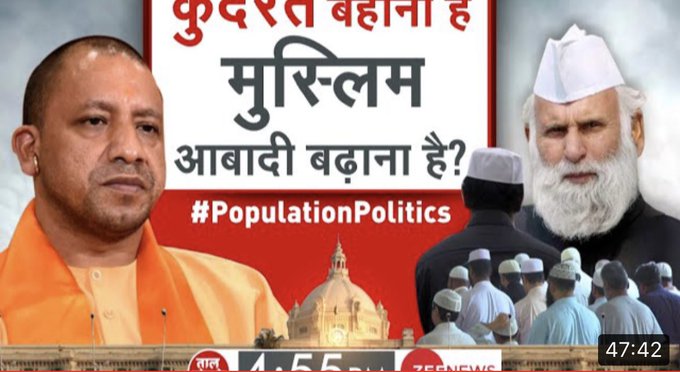 The Authority noted that the taglines created a perception that there is only one community that is responsible for the population growth in the country. It, therefore, clarified that adding a “disclaimer” to any programme including debates does not absolve the broadcaster of its responsibility in the event the programme violates the Code of Ethics and Guidelines issued by the Authority.

The NBDSA on June 13 issued another order against Zee News, News18 MP/Chhattisgarh and News18 Rajasthan over a video snippet of farmers’ leader Rakesh Tikait saying “Agla target media house hai (The next target is media houses).” The channels had aired the video alleging that Tikait threatened the media with destruction if they did not support the farmers.

However, this was not the farmers leader’s full statement. He continued, “Aap ko bachna hai toh saath dedo, warna aap bhi gaye (If you want to survive the government’s pressure, support the farmers).”

This petition was filed by advocate Ghorpade on September 30, 2021.

This article first appeared on thewire.in

‘Run with names of Hindu deities’: Panchayat in Manesar calls for...

Battle Over Textbook Revision in Karnataka Has Helped Expose the Ideology...