Coimbatore: They are people we see and interact with on a daily basis. But today, we saw them in a frightening avatar.

Some locals had erected a ‘pandal of hate’ at Kanuvaipalayam Pirivu, a small rural outpost some 50 km from Coimbatore and a few hundred metres from where I live. The occasion was Vinayaga Chaturthi.

Two days after the festival every year, a procession carrying Pillayar (Ganesha) idols from neighbouring villages and Karamadai and Mettupalayam towns pass this way to reach the Bhavani river, where the idols are immersed. This year, the occasion was captured by the Hindu Munnani, the extreme Right-wing religious organisation in Tamil Nadu (which shares camaraderie with the Vishwa Hindu Parishad), to hammer their agenda of intolerance.

Saturday, September 15, was that day.

At about 4 pm, a menacing voice on the loudspeaker amid drumbeats caught our attention – my ten-year-old daughter, who was studying on the terrace, and I, were equally compelled to get out of our homes and get closer to listen to what was being said. We came onto the street and saw their cadres and supporters were among us – auto rickshaw and taxi drivers, shopkeepers, students, neighbours. On the dais were familiar faces and one among them held forth.

A rough English translation of my phone audio recording is attempted below:

“The Tamil Nadu government tried to put an ‘off’ [obstacle] in the Vinayaga Chaturthi celebrations recently. What I am asking is, are you trying to mess with our Pillayar (Ganesha) anna? In the neighbouring state, they tried touching Ayyappa – the Communists said they would send women to the temple (Sabarimala). What happened then?

Kerala is submerged in water; the government itself is drowning.

Here also, there is a brother, Edappadi. [The speaker is referring to the Tamil Nadu chief minister Edappadi K. Palaniswami. In that part of the speech, the speaker is peeved at the TN government for imposing 24 conditions (which he wrongly says as 42) relating to the festival celebrations (mostly environmental) which did not allow celebrations on the scale that they usually would.]

But we are telling the Tamil Nadu government – if you lay your hand on Pillayar, he will bring you down before you know it, so don’t play with him. 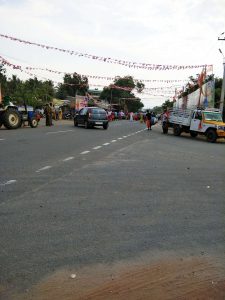 There are many terrorists in Tamil Nadu – their activities are widespread here, they have weapons in their hands. But our boys who install Pillayar idols – what weapons do they have? Just saffron cloth and holy ash on their foreheads – are they terrorists? You must think…

The Tamil Nadu government said, only after meeting 42 (sic) conditions, can we install Pillayar. Then, you [government] said we have to get permissions from various departments for that. Why, just a couple of weeks ago, when Bakrid was celebrated, cows were slaughtered in the middle of the street. They hacked my cow-mother in the middle of the road! What permission did you ask them to get then? All this has to be reflected upon…

If there is no unity among Hindus, this Bharatha-desam can soon turn into Pakistan. If we cannot install Pillayar here, then where do we go and install him? In Pakistan? Whom do you want to ‘appease’ now that you have decided to lower the importance of Pillayar?

In this country, elements of terrorism, casteism, and communalism are only rising.

There is a team that goes around saying ‘Nee Tamizhar, Naan Tamizhar…’ (referring to the Naan Tamizhar Katchi, led by Senthamizhan Seeman, a proponent of Tamil nationalism)

Then who are we – foreigners?

We alone are the Tamizhars.

Those saying Tamizhar are ‘appeasing’ Christians and Muslims – Seeman, Daniel Gandhi, and Gauran – I ask them – why, there may be Muslim terrorists who have come from elsewhere into our country but where do the Hindus who have lived here all along and will die for this soil go? What is to happen to them?

They asked mantras in temples should be said in Tamil. Iyers [Brahmins] should not say them [in other language]. Now if you take the same mantra to mosques, in which language is ‘Allah-ho, Allah…’ being called? Shouldn’t they ask that question? But they will not ask.

And the Christian Church, what language do they speak? They belt it out in their own language, in English. What is that language? Where did their God come from? Didn’t he come from the north? Think of that…

The Christians and Muslims living here, they are not born on this soil. They might have changed their religion. If the ones who have converted say they cannot live here, then they must leave. They should not live here giving any trouble to the Hindus here.

Anyone can live here, but [inaudible]….

At the same time, we are not like Seeman who will twist your arm and shout ‘Naan Tamizhar, Naan Tamizhar’.

In one advertisement, a small child is asking his grandfather – why is that man on the stage shouting so loudly and what is he trying to say? The grandfather replies, he thinks by shouting what he says will become true. But however much he shouts, he is (a Christian? [inaudible]), and that truth cannot be changed.

A few days ago, Naam Tamizhar organised a gathering, and invited a fellow – a Kashmiri terrorist, Yasin Malik, to preside over it.

Yasin Malik is waging a war in Kashmir against the Indian Army taking crores of rupees of funding from Pakistan.

This country shouldn’t do well, it should go to bits – he is someone who thinks like that – and such a person has been brought to preside over that gathering. Then just think of what all his motives are. This country has to somehow disintegrate – this is his ulterior motive.

I ask all these people, when Sasi Kumar (of Hindu Munnani) was murdered by activists from the (inaudible) and Popular Front, then why didn’t these people come forward and support?”

The speech went on for a few more minutes, but my daughter had been sufficiently terrified by what she had heard and understood. She pleaded to go home.

The first ‘live’ hate speech by the Hindutva forces that I heard was during an Akhand Bharat Diwas rally by the Vishwa Hindu Parishad in Kota, some 14 years ago. It was different in that I was reporter for a weekly and travelled back some 250 km to safely file my story in Jaipur. But yesterday was different. This speech had taken place right next to my home. The local police were there, listening mutely. The organisers and speakers were not some unknown fanatics whom I would never probably see again, but people I would come across again tomorrow, everyday. And I stood there as a parent, having to face my daughter’s fear when she repeatedly said, let’s go home, “Please take into consideration that I am a child.”

Is this the milieu I want her to grow up in?

There were other children around too. For many of them, what they heard would probably be the only version of history and social studies they would know outside of their textbooks. Who was to make sense of the truth and reality to them? Would their parents go back home and explain to them that what was being said was hateful and divisive and completely misleading and ironic? Or would they simply keep shut?

Next morning, when I asked my usually amicable vegetable seller at the junction where the speech had taken place what he had thought of it, he nonchalantly replied – “I don’t belong to this party, but had to join in the celebrations, we have to fall in line.” A taxi driver at the stand who was the only one who did not contribute financially to the festival pool said, “I just don’t go there that day, even if they are my friends.” Avoidance is the strongest form of protest seen here. And that clearly stems from fear.

The confounding combination of caste, religion, fundamentalism, nationalism and separatism that political and religious outfits in Tamil Nadu thrive on diminishes our capacity as a society to focus on priorities, to preserve universal human values. We may feel detached from the politics they play, but the politics of hate is much closer home than we ever knew.

Silence is no answer when intolerance comes knocking at our doors. What are the options then? There is always the law as a recourse, however convoluted that might be in reality, especially if the police are not proactive or are biased. Confrontation and dialogue with those spreading such violent messages may be another way, but again, this is easier said than done. A dialogue implies a willingness to listen on both sides and even the consequences of a face-to-face, and the immunity one has in these instances is linked to privilege, power, and networks. But the least each one of us can do is begin to speak out and against such divisive and intolerant forces, in our homes, in classrooms, in public together and strengthen the voices of reason that are increasingly being stifled. Such occasions and speeches can be used to teach children how not to think and to stand by it. It’s a beginning that’s never too late.

This article first appeared on TheWire.in on september 18, 2018 here.