By  Mohammed Baleegh / The Siasat Daily

Film maker Leena Manimekalai said she received death threats from the Rashtriya Swayamsevak Sangh (RSS) regarding the poster of her latest film ‘Kaali’. Leena took to twitter in the early hours of Monday and posted a picture of a letter that is reportedly being circulated.

“RSS is circulating this death threat in Toronto. Someone from Etobicoke has sent me this image @TorontoPolice“, said Leena Manimekalai on Twitter. 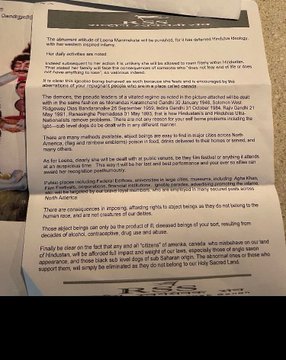 The filmake also tagged the Toronto police in the post. “Her (Leena Manimekalai) abhorant attitude has defamed the Hindutva ideology,” said the letter in question. It also stated further that Leena won’t be allowed to move freely in India.

The alleged letter from the RSS also states that Leena’s family will have to ‘face the consequences’ due to her actions. In July this year, Leena Manimekalai came under fire after the poster of her film ‘Kaali’, depicting a woman as goddess Kali smoking and holding the flag representing the LGBTQ community, went viral on social media.

The poster was seen as provacative by many a right wing organistations leading to quite a few cases againsst Leena.

This story was originally published in siasat.com . Read the full story here