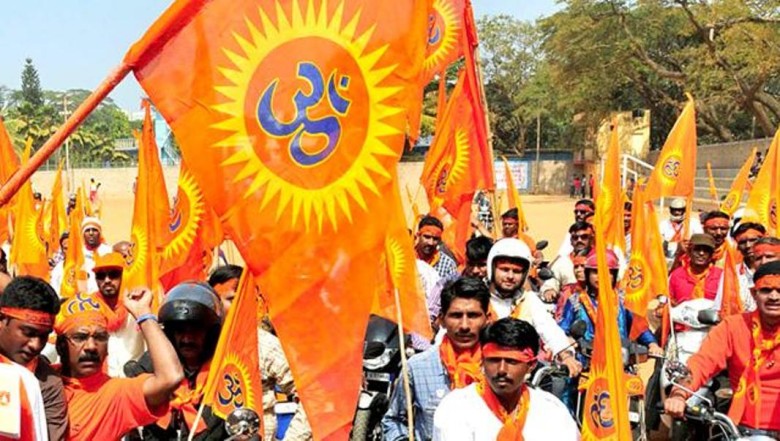 VHP was tagged under militant organisations in CIA’s latest factbook. Credit: Twitter/ANI
Just days after members of the Vishwa Hindu Parishad (VHP) vandalised the west gate of Taj Mahal, the right-wing organisation along with another notorious group Bajrang Dal, have been classified as militant religious outfits in the recently updated World Factbook published by the US Central Intelligence Agency (CIA).

In CIA’s annual encyclopaedic publication that “provides information on the history, people, government, economy, energy, geography, communications, transportation, military, and transnational issues for 267 world entities,” the two groups, considered as affiliates of the RSS, have been tagged as “militant religious outfits” under the section titled “political pressure groups and leaders”.

The RSS has been classified as a “nationalist” organisation, while the All Parties Hurriyat Conference led by Mirwaiz Umar Farooq in Kashmir has been labelled as a “separatist group”.

This categorisation is a welcome step in identifying the menace wreaked by such hardline right-wing groups in India.

Militancy has always been at the core of VHP’s ideologies

In the 1980s, the Vishwa Hindu Parishad (VHP) began a campaign for the construction of a temple dedicated to Lord Rama in Ayodhya. Then led by Acharya Giriraj Kishore, Swami Chinmayanand and Ashok Singhal, the VHP went on to play a mammoth role in the Babri Masjid demolition in 1992 and subsequent pogroms against Muslim communities in North India.

After BJP’s victory in the 2002 elections in post-riot Gujarat, international president of the VHP, Pravin Togadia, had reportedly said, “All Hindutva opponents will get the death sentence, and we will leave this to the people to carry out.”

Early in 2002, Frontline published an article regarding the Vishwa Hindu Parishad’s aggressive stance on the construction of a Ram temple, raising suspicion regarding the Sangh Parivar’s future plans to spring a surprise in Ayodhya. Besides mobilising opinion through programmes such as yagnas, the chanting of mantras and the distribution of miniature trishuls (tridents), the VHP launched a comprehensive public relations exercise in Uttar Pradesh, wrote Purnima S. Tripathi.

Leaders of the VHP were confident that once lakhs of people congregated at the designated site, no force in the world could prevent them from doing whatever they desired. Form, vice-president, Acharya Giriraj Kishore had famously said, “At the most they would use force, open fire. But if you remember, all the force at Mulayam Singh’s disposal could not stop kar sevaks from climbing atop the dome of the Babri Masjid in 1990 and hoisting the bhagwa dhwaj there.”

“So this time too, what more can they do? Kill some people? We are prepared for that,” he added.

The rise of VHP coincided with the raze of secularism

Both the VHP and the Bajrang Dal are famous for their liberal use of toxic anti-Muslim rhetoric and for perpetuating indiscriminate violence against minorities under the pretext of establishing a Hindu empire.  Recent crowning achievements of the organisations include legitimisation of the “Love Jihad” brigade that singles out Muslim men for “conspiring” to seduce, marry and convert Hindu women, thus strengthening their numbers in India and posing a “big threat” to national security.

The VHP also reportedly employs a network of spies who work as restaurant employees across UP to keep an eye out for “suspicious” (read interreligious) couples.

The fault in our faiths

Although this international recognition is not likely to deter the alarming rise in militant nationalism, it does make the administration answerable in the international community for turning a blind eye to such communal violence.

In response to the militant tag, the VHP on Friday threatened to launch an international movement against the CIA if it doesn’t change its classification of the Hindu group. Calling the allegations baseless and false, VHP leader Surendra Jain asked the CIA to apologise and “rectify its mistake”.

To those crying for help, Gujarat police said: ‘We have no orders to save you’

State Participation and Complicity in Communal Violence in Gujarat Summary of the report on Gujarat Violence by Human Rights Watch in May 2002. A Hindu mob faces off with a Muslim mob during during Gujarat’s 2002 riots. Photo: AFP Thirty-eight-year-old Mehboob Mansoori lost eighteen family members in the massacre of Muslims in the neighborhood of […]